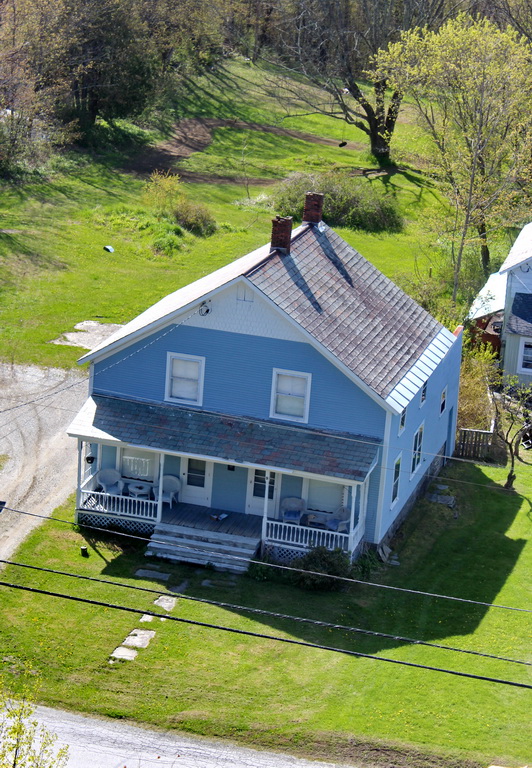 This is my house. I bought it eleven years ago when I first moved to Vermont.

The picture was taken from the quarry across the street from me, a rambling old slate quarry that was abandoned, depending on who you talk to, in the late fifties or early sixties. There is a rabbit warren’s collection of paths and small canyons that run through the quarry. It is my favorite place to go walking. Even though it is right in the middle of the village, I hardly ever see another person there.

The house was a duplex when I bought it. Within 24 hours, I was busting out the walls between the two apartments to make it into a single home. Since then it has been a revolving door with kids moving in while in high school, then moving in and out during college, and finally moving out for good as they each finished college and set out on their way. With each moving in and moving out things got rearranged to best suit whichever of my kids was living there at the time.

I like being an “us” again. I spent a lot of years between the ending of my first marriage and finding the woman I love and marrying again. I can’t say I hated being single. I didn’t. The first few years of being single again were part of rediscovering who I was outside of a relationship, of rebuilding who and what I was, saving some old parts of me that had gotten lost, and discovering new parts of me in this strange new world I had come to. I became comfortable as just me.

But when I met the woman I love, the woman who is now my wife, I rediscovered the joy of there being an us, of working together to be more than just me and or just her, both of whom were pretty good people, to something stronger.  I rediscovered the adventure of relationship, with its ups and downs and constant newness, fun, and passion. I began to grow in new ways. I began to heal in ways I did not know I needed to heal it. I gained a new daughter and a new cat.

And we began to remake the house, bringing in some of her furniture, letting go of some of my old furniture, buying some new things together. We changed out some of the art, repurposed rooms, rethought how we do things.

That remaking has continued in quarantine. We both work out of the house and do much of our work in two different offices that are on either side of the house, with a connection hallway between them. It’s a good thing for us, because we can work privately, or call out and talk to each other without moving, or get up for a stretch and a hug when we need it.

But quarantine has meant many more video conferences, zoom meetings and now there is a need for privacy. Both of our work demands confidentiality and so there was more re-arrangement, I set up a second office in my studio, a few miles away.  We’ve added cameras, microphones, and all the paraphernalia of the modern home office, times two.  High tech heaven in our antique house, that’s us these days.

The surprising thing is that all this change, with kids coming and going, and then marriage, has happened in this 1800’s house that from the outside, has changed very little. I took the picture just last week when I was walking. I had taken the same picture a decade ago, and there is very little difference. But on the inside, the space is totally different than it was eleven years go, or five years ago, or even a few months ago.

I think sometimes, we people are like that. Often we seem to be the same. We look the same. We talk the same. We have a lot of the same outward presentation of who and what we are, and all the while, we are constantly becoming new.

I run into people from my pre-Vermont days and they tell me “You haven’t changed a bit.”  But I have. I feel like an entirely different person than I was when I first came up here. I have healed and grown and changed and exchanged. My relational life is different. My faith is different, more proven, less theory. I have taken on whole new ways of being and doing. I was always a mountain guy, now I am a beach in the offseason guy.  Those changes are reflected in my poetry, my art, and in every emotion I have. My depression has risen and fallen a dozen times. I have lost people dear to me and found new people dear to me.

Physically, I have changed a bit. More gray hair. Deeper wrinkles. But the real change is inside, and most people don’t really see it. It is the same for most of us. I am sure I could ask you how you have changed in the last decade, and the differences would be profound. Because that is what life does to us. It changes us. Change is part of being alive.

Even if others never see it.

I try to remember this as I look at people. Colleagues. Clients. Parishioners. My dear friends. My children. My wife. None of the “You aren’t the woman I married.” stuff for me. Of course, she isn’t. None of us are. Even if we can’t see the differences, they are there. They are evolving. Even when we can’t see it in people, it is happening.

This is a good thing to remember as we plow through this time of quarantine. We have all been and will be changed by this time of Coronavirus. We won’t see many of the changes in the people around us, but they will be there, and they will be profound.

As we prepare to celebrate tomorrow, I am in a good place. Changed by her and for her. Our relationship is different. If a relationship is supposed to make the other person a better person, then she has succeeded spectacularly.  I am stronger, more compassionate, funnier, less of a worrier, and know all sorts of random facts (We are both kinda nerdy that way.) than I ever was before her. And we are just three years in.  I have grown in terms of learning to live the grace I have always believed in. Not just in terms of giving grace, but in terms of accepting it, where I was always weak. I can’t wait to see what the years ahead bring. And yet, I will look the same. Just like my old house across from the quarry.

Don’t let that fool you. With anyone.

PS: Apologies to David Bowie, from who I stole the title. His music still rings in my head almost every day.