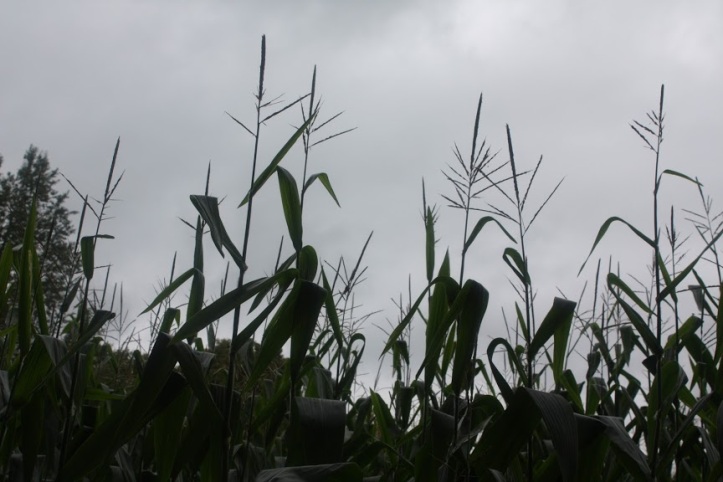 The corn is starting to sprout.

It’s pretty amazing up here in Vermont. Seeds grow fast, as if they somehow know the growing season is short and their life is a race to grow into fruition, to harvest, before the early winters kill them.

It was different in Virginia, where I came from. The growing season is long there, and there is a languid pace to farms and gardens. You can plant early in the spring and our Indian Summers are slow and wonderful.  But not here. It’s a furious and fast thing to farm here in Vermont.

Other than farming, however, Vermont has its own time zone. People move slower than my favorite oh-so-slow molasses in February.  “Soon” means “eventually. “Tomorrow means “sometime this week.”. I have a plumber who actually gets to things fast. The rest of my world? “Someday” seems to be the operative word. People up here laugh about this strange time warp where time has no real meaning, but no one denies it. It’s just how things (eventually) get done up here.

I came from a corporate culture, the television technology industry, that worked just the opposite way. “Now” meant “You haven’t done it yet?”. “Tomorrow” meant tomorrow, at 8 AM. When I moved up here and did things on the actual timetable I promised, people considered me a little weird. Almost suspect.

But I have come to like this time-has-no-meaning culture. It still seems a little strange, but it’s a culture that extends to people and change and growth. There is a contentment to let people become at their own pace, to grow into themselves, to change at a natural pace, not some pre-conceived, arbitrary timetable.

That, I have learned in both my coaching work and my pastoral work, is where real, lasting change happens, when it’s done in a person’s own timetable, instead of my sense of what their timetable will be.

Here is what I have learned in my years here. People who decide they have to get to “X” by “X” date often get there, but rarely stay in their better place. People who get to “X” at their own, natural pace, taking large or small steps, but always moving forward, not only get to “X” but are happier getting there, and manage to hold on to “X” far better.

I’ve adopted this “go at your speed” approach to much of my change work, and the pattern is pretty consistent. It pretty much works for everything except maybe when your pipes burst in the middle of winter.

But for human change? There’s a natural pace to it, and learning that pace and working with it instead of against it, pays dividends. We humans are terribly impatient, but maybe we need to learn to slow down, find our pace, and live with it. Some pretty amazing things happen when we do. Not fast things, but lasting things.

Maybe these Vermonters are on to something after all.