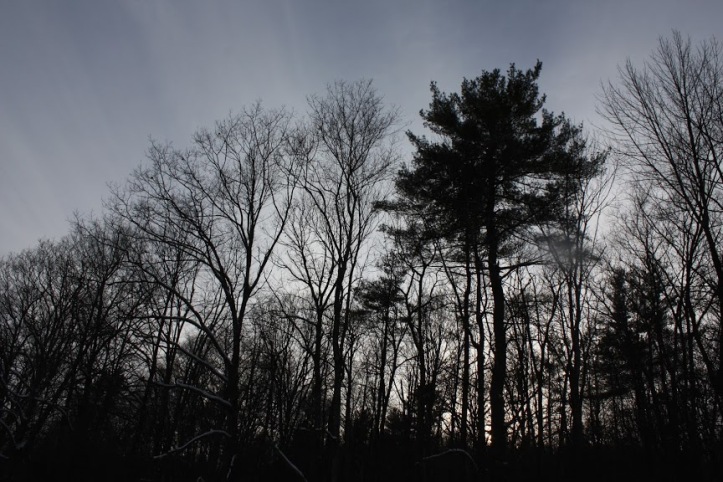 The big pine stands at the edge of the field, barely noticed
until the coming of Autumn,
when all around it, leaves fall and suddenly
it becomes a landmark, a pointer
to the path home.

I spend a lot of my time simplifying.

That’s not an easy things. There is a tendency to complexity in our world. “It’s complicated.” is our mantra. And it if isn’t complicated, we’ll make it complicated.

I have had a reminder of this tendency this week. My laptop died. A hinge went out on one side and the whole display split apart. Now and then, sparks flew. It was time to get a new one.  A quick order to Amazon and the new machine was here in two days.

Then comes the laborious job of loading all the software on the thing, and linking all my cloud services and softwares together. I have a pretty streamlined system that allows me to run my business, my ministry, my art and my private life in a seamless workflow of programs, apps and cloud services. Seamless that is, until I have to reconstruct it.

In that mix are some old versions of software that I love and use all the time. When it comes to software, I go for simplicity. But you know what happens, each version adds features and at some point, the very simplicity that attracted me is no longer there. Yes, it will do a million things, most of which I will never actually do, but it starts to be work to do the simple tasks I need to do.

So I go back to earlier versions. And I stay with them.

Easy enough, until you have to rebuild your computer. No one wants to let you keep the old version. They fight you on it, and spend time telling you why you should not use the old version. Long lists of new features flow out of their mouths and emails. They don’t get it – I have features enough. I want simplicity.

I often get kickback from clients too. Very often, the solution to their problems is simplifying, but they almost always resist. Their eyes glitter at all they could do, when the truth is, they won’t really do most of those things. And in the meanwhile, the complexity is causing problems, creating roadblocks, sucking up time that could be better used helping them actually achieve what they actually want most.

Eventually they figure it out (or they fire me, but most of them don’t.)

I see the same thing in my pastoral work. “It’s complicated.” I hear often. Well, it often is, but as we talk our way through things, it almost always is, at it’s base, simple. Because God makes it all simple. We make it complicated.

I don’t really have my arms around why we make it complicated, what ever “it” is. I have some theories, but nothing I have been able to prove. I just know it is.

And that is the point of the poem. Simple enough.

I do wonder though, why we can’t stay simple? What moves us to complexity upon complexity. Something to think on, I suppose.